This appeared on our Facebook page (Greater Rochester Track Club (GRTC) | Facebook) a couple of weeks ago, but now we can finish it with a picture. It is a small story but is also so typical of the “runners helping runners” ethos that invigorates our sport. On New Years Day, the GRTC received an email from Brian Trimble of Bedford, MA. Some years ago, he found a fleece vest on a path there. He washed and hung it in a closet, intending to try and find the owner. He forgot for a time but using the “Rochester Runner of the Year 2005” embroidered on the vest in an Internet search, he contacted the GRTC. We, in turn, dug into the archives, thinking the vest would have been a RROY winner’s prize. For the record and you Memory Lane folks, the 2005 RROY winners were: Men 1. Kevin Collins 2. Dave Bradshaw 3. Eric Boyce. Women 1. Christa Downey 2. Judy Johnson 3. Sarah Nazarian-O’Connor. Masters Champions: Scott Bagley and Beth Ann DeCiantis. Since the vests were made by Mike Reif of the Genesee Valley Harriers, we shared this search with him. Mike, who is still in touch with some of the 2005 winners, reached out to them and struck gold. Christa Downey Meyer now lives in Portland, OR, but several years ago resided in the Bedford area. She had lost the vest on a run and thought she would never see it again. Brian shipped the vest to a deeply grateful Christa and here we have the two reunited. 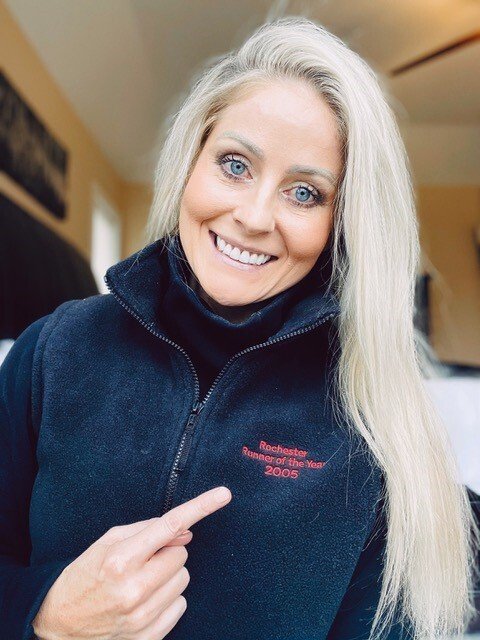